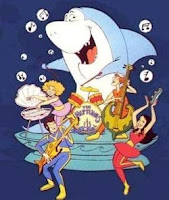 Game 81 sees the Canucks return to the (looks at his notes) the um, HP Pavillion, affectionately known as The Shark Tank. Meh. From this day forward, we shall call it The Laptop. Anyways, the Canucks playoff position is set, division title clinched and just awaiting an opponent.

So how do they get motivated for this game? Well, there's the opportunity to keep San Jose from clinching top spot in the West, but you know the Sharks will be just as motivated for that reason. There's the chance to tie the team record for most wins in a season, but they had that opportunity against the Avalanche the other night and it didn't quite go to their liking. So I guess the real motivation should be an opportunity for a Sharks team that struggles with self-doubt heading into the playoffs to get a real solid fear put into them. Slap them around at home and let them know that should they be able to overcome the mental block of the 1st round, and more of the same could be waiting for them.

Can the Canucks actually do this? Certainly. They managed to defeat the Sharks at home once this season, and while the Sharks truly are a different beast in the friendly confines of the um, Laptop, they're not an invincible juggernaut. The Canucks will certainly need better team defence, and some of the line changes tonight might be able to help that. Nolan Baumgartner will likely draw into Andrew Alberts' spot and Ryan Johnson has been replaced by Matt Pettinger, who was called up from the Moose after Johnson suffered another fracture blocking shots.

Here's the situation for the Canucks: Lingering doubts about this teams' ability to win in the playoffs, centered around the goaltender. A defence core so beaten and battered it looks more like the starting lineup of the Moose. The bottom 6 still struggling with consistency. Can this team silence the critics? Despite overcoming huge odds, Vancouver's numbers rank them with the elite this season, yet many are loathe to do so because of past performance. Forget the sheer hypocrisy of this, they are right in a way. The regular season proves nothing but home ice in the playoffs.

So despite clearing the 100 point mark and winning their division handily, the Canucks are once again being written off, some even going so far as to say their potential first round match against the Kings should be nothing for LA to fear. No respect. Good. I say let them walk into it cocky. Let them underestimate us. Up until a bad game the other night at the Staples Center the Canucks had handled the Kings easily. Going to predict a cruise to victory on one game? Go for it.

The Canucks may be struggling, as they have all season with injuries. But they are determined, none more so that Henrik and Daniel Sedin. They've had incredible seasons, especially Henrik, who is poised to become the first Canucks player to win the NHL scoring title and possible the Hart trophy as well. There are a number of players who have had career worst years in a season that's turning out to be one of Vancouver's best. They want to prove the critics wrong, and no one more than Roberto Luongo.

The criticism that he couldn't win the big game was vanquished when he backstopped Canada to gold in front of the hometown fans, but when you look at criticisms of the team lately, it's as though it never happened. Is he playing his best hockey right now? No. Is he getting more rest heading into the playoffs than in previous years? Yes. And that could end up being one of the reasons the Canucks are actually a team to fear. So like I said, take the Canucks for granted. You'll be sorry you did.
Posted by Kent at 10:40 AM

Kent
Originally hailing from Kamloops, BC Kent was the host/producer of the 'All The Rage' music video show on Kamloops Cable 10 from 1988-1994. He hosted 'Mass Hypnosis' on CFBX Radio at TRU in Kamloops from 2000-2004. Kent is currently a writer for nucksmisconduct.com and his metal blog Bitter Old Metalhead Blog. He lives in Victoria, BC with his fiance Laurie and 2 dogs.

Canucks Blogs Better than this one